Friday, October 11, 2019
The Canadian Opera Company's Rusalka opens on 12 October 2019, and I was privileged to receive two tickets to see the dress rehearsal. Because of my brain injury, and only because of my brain injury, I stayed for Acts I and II and had to leave during the second intermission. I would've loved to have stayed for the third to see Sondra Radvanovsky's towering performance as Rusalka. 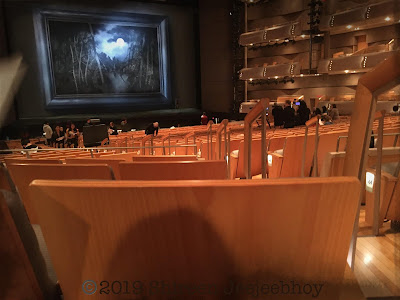 The student dress rehearsal I attended was introduced with welcomes to all the schools attending. If you think teenagers aren't interested in opera, uh, I have news for you. Their chatter and buzzing to and fro, with knapsacks on, was like the excitement around a big sporting match. When Earl Haig Secondary School was welcomed, the kids cheered, and the hall built for sound, felt like an happy eruption. There were many, many other schools or student groups there, but that one was memorable! Anywho . . .after the introduction, the lights went down, and the opera began.

Antonin Dvořák's 1901 opera is a simple storyline of magical being falls in love with a mortal man and gives up everything to walk on the earth with him, only for him to be a typical putz.


"The mermaid Rusalka leaves behind her watery home to be with her prince charming. Will he stay true to her sacrifice?


The opening scene had no singing, no sounds, except from the orchestra whose strains wove threads of loss and anger around the two lone characters on stage, looking with yearning at the moonlight of the backdrop. I'd forgotten how actors' body language can emote so much.

They left. The backdrop rose to reveal a set with a hanging moon, trees that moved, casting shadows over a pond filled on and off with fog, around which danced nymphs in a rather rude ballet and out of which emerged a water goblin intent on catching one of the nymphs. They fled, and the real story began of Rusalka's longing to become mortal, to gain a soul, and to have the object of her love feel her embrace.

Up to this point, fatigue dragged on my attention as I tried to engage with the story and see non-blurrily the dancers and singers in the shadowy lights. My vision wasn't at its best, unfortunately. I was also focusing on the dancers as my friend was involved in rehearsing them. I wasn't sure if some of the disharmony was deliberate or lack of polish.

We were told some of the singers would be saving their voices at some moments. I don't think anyone gave that memo to Radvanovsky. Her voice trembled, it whispered, and then it punched right through the air and vibrated the chords in all of our hearts. I didn't know what was more impressive: that the Four Seasons Centre for the Performing Arts actually did what it was supposed to, carry sound without need of mics, or her being able to project her voice to the very back walls with every nuance clearly audible.

Her performance alone enticed me to stay for Act II.

The crows did as well. They were hard to discern, with black feathers against flitting shadows. But their hops and fluttering wings caught my eye. It's too bad the Director resorted to stereotypical female screaming to connote chaos instead of having the crows caw, a menacing sound even in daylight.

I was glad I stayed for the second Act. A completely different set opened Act II. I'm really impressed with how much set design has evolved since I was last able to attend the opera. It isn't just the realism of a fireplace or ballroom, it's also the light projections, the 3D of it where the stage floor can become a pond and trees evoke a forest. And I'm amazed that for the first time ever, I can sit in an orchestra seat with a tallish person in front of me and still be able to see the entire stage. That's excellent design I didn't think Toronto had access to!

The dancers in Act II put on a divine pas de deux.

And the supporting dancers were a quirky mix of mischief and beauty between the rich and noble in their finery. I wondered how Radvanovsky would portray Rusalka after her voice was taken away. I found her movements emotional, full of pain, but not as powerful as when she sang. Štefan Kocán who plays the water goblin became more captivating in Act II than in I. Perhaps, the singers grew into their roles, became more confident as the dress rehearsal went on. I could easily see and read the surtitles the COC is famed for -- I was there when they first began to use them and what a fabulous invention for those of us who don't speak multiple European languages. (They appear in the dark band above the stage in my photos.) 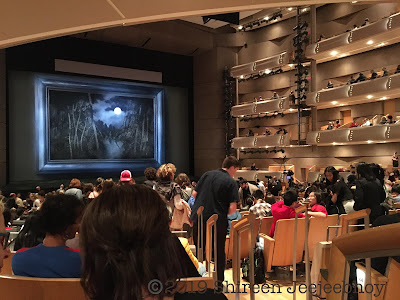 Just as I had to leave abruptly at the end of Act II, I now leave this review with one more sentence. This opera is worth attending.
Reactions:
Culture Entertainment Photography Toronto