It's Olympics Time, the Snowy Version 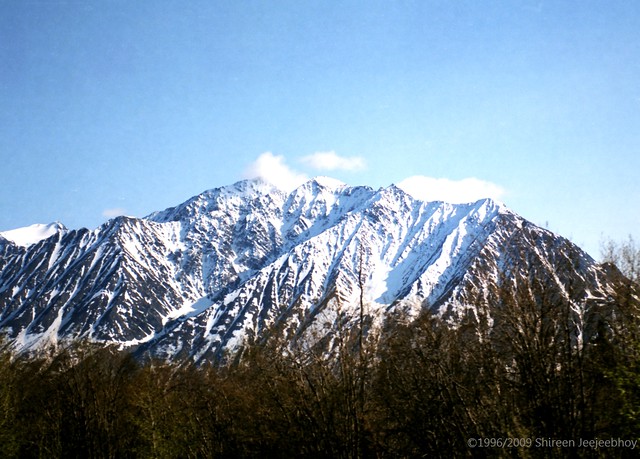 To soar above the trees: a photo of the Yukon mountains dressed in snow. It's like the Olympics -- athletes aim to soar above the rest, some of them literally like in slopestyle skiing where Canada won its first medals along with a new Canadian from the Netherlands in the men's 5000m speedskating race.

The events have grown so much that they now start before the Opening Ceremony, something I'm still getting used to remembering to catch. This year the time difference is the hardest adjustment. This diehard fan should've taken two weeks off and reversed the sleep schedule. Oy!

The coverage has evolved too. Long gone are the horrid years when CBC covered them from the home studio (still can't fathom who was so stupid as to make that decision).

@ShireenJ: After #Olympics cvg debacle that lead to losing Brian Williams, #CBCOlympics heard Canadians (losing to CTV for Vancouver helped too), has pulled out all the stops. Best hosts evr. Fabulous right-there commentating. Great digital options. Too many ads but better that than bad cvg

They've also come a long way from the early days of live streaming where we got tiny video windows with audio from the event only, no commentating, no graphics, and you had to be an uber fan to know what you were watching. Not only that but the CBC app works way way better than for last Olympics. Chromecasting isn't too buggy. The audio is so crisp and picks up so many details -- like the ping of the puck on the goal crossbar as the Canadian sent it soaring toward the Russian goal in the opening women's hockey game, um, ice hockey -- because this is the Olympics where apparently other forms of hockey exist. Ha!

I'm also impressed with the hosting. It took awhile for CBC to know what to do after they lost Brian Williams to CTV (well, really, confine him to the Canada-based studio and lose Olympics coverage to CTV and what did they expect). This Olympics, they brought the excitement back that went with Williams. Scott Russell is a nice guy, but he doesn't do excitement and gravitas like Williams. CBC seems to have approached almost every summer and winter retired Olympian and put them in hosts' chairs, in key on-the-ground setup and interview spots, and, of course, in for the colour commentary. The sheer number makes the Olympics feel intensely Canadian and significant and just plain fun to watch, even at effing o'clock. It must be good for the athletes too to be greeted by a Canadian Olympian or well-known sports journo in the mix zone.

Some grumble about all the features and back stories, just get to the sports, they growl. Pfft. Go load up the app and watch the live streams! For the rest of us, dialling in to the morning and primetime shows (or the overnight one for the night shift or insane Olympics junkies), let's us experience the whole of the Olympics, for it's not just about the sports and the medals. It's the stories too. And in the same way that people follow Sid the Kid and his story, regular Olympics viewers recognize old faces and love to hear their stories and learn about the newbies, too.

One last comment: the graphics! Holy --!! The solid-hologram effect when Alex Despatie (best part of the CBC hosted shows, one of my fave Olympians since he broke onto the stage -- or dived -- as a young teen, but I digress) and Andi Petrillo introduced an athlete, was so cool and new-to-me, that I absorbed absolutely none of the info. But like with all new digital tech, I'm already getting used to it and expecting this high calibre work in all CBC coverage.
Canada Olympics Photography Sports

So all I wanted to do was have my daily massage session in my Human Touch massage chair. Well, it decided to go on strike , after all the Toronto city workers were, so why not it! The remote started beeping -- continuously. Once it started beeping, the chair stopped working. Nothing I did worked, whether turning it off and back on again, waiting so many seconds before turning it back on, unplugging and plugging it back in. And so I called Human Touch , an American company and the manufacturer of this amazing piece of technology that saved my sanity from whole back and stomach pain, neck stiffness, foot pain, and sore legs. They suggested there was a short in the remote. I'd only replaced the remote last summer, and the cord was in good condition, but whatever. Better a problem in the remote than in the back rest where the massage mechanism is, right? Like I could determine fate. So they e-mail Intertemp International , the company based in Calgary that takes care of shipping parts

A controlled substance is "any type of drug that the federal government has categorized as having a higher-than-average potential for abuse or addiction. Such drugs are divided into categories based on their potential for abuse or addiction. Controlled substances range from illegal street drugs to prescription medications." Carnitine is a nitrogen amide or quaternary ammonium compound synthesized by the human body from amino acids or ingested primarily through meat eating. Vegetarians, needless to say, consume very little carnitine, and vegans none. Carnitine is essential for transporting fatty acids into mitochondria where the fatty acids are used as fuel to create energy. Those born without the enzyme that allows carnitine to work its magic have to consume carbohydrates, only carbohydrates, as their energy source and if they go too long without eating carbohydrates they will become weak. There is also some work that shows dogs who do not get L-carnitine in their diet

Finally I have proof. Eyewitness testimony. For years I've thought that Canada Post parcel delivery service does not in fact deliver parcels -- they deliver parcel delivery notices, those notices stating that one's parcel is at the post office waiting for pick-up as there was no answer when delivery attempt was made. When I got one of these notices, I'd look at the date on it, think about where I was, then suddenly realise I was at home all that day. I'd puzzle over how I missed that distinctive courier/letter carrier/police knock on the door. It happened over and over until I decided that Canada Post doesn't actually deliver parcels that need signatures, only the notices. My take on their thinking was that no-one is at home, so why bother. Today I have proof I'm right. I got one of those bloody delivery notices, called Canada Post, got the "we only do one delivery; I'll have the supervisor call you" spiel. When? In 24-48 hours. Wow. Love the ex

Well, as usual, I'm just about out of the loop as to what's going down in TV land. Marilyn Dennis said on the radio (CHUM FM 104.5) this morning that Friday is her last day . Whaaaa??? It's not that I'm surprised, it's just that I didn't expect it to actually happen , if that makes any sense. Marilyn Dennis made CityLine the popular and well-loved show that it is today. Dini Petty, who started it, was never to my mind the kind of host that can stick around long enough to make a show a must-watch part of one's day, a show like Oprah's for example. Under Marilyn's guidance and in the creative incubator of Citytv, CityLine became the only truly successful Canadian daytime show. Other hosts have come and gone on other shows, other channels have tried to replicate CityLine's success, but none have succeeded. I bet when the CRTC OK'd the merger of CTV and all those radio stations, it didn't anticipate it would kill off one of the few Canadian t

I attended the TTC’s legally mandated annual public forum on accessibility and blogged on it last week . Today, I share what happened during one of the one-on-one conversations with TTC staff during Part One of the forum. I wanted to talk to someone about the renaming of subway line names to numbers. I know, I know, the TTC insists they haven’t renamed them. But they use the real names of the subway lines less and less and quite often not at all, only referring to them by numbers. So, de facto, they have renamed them. Anyway, I asked one of the pleasant volunteers at the entrance who to talk to. The TTC has taken lessons from Wal-Mart. The volunteer not only walked me to the Marketplace where the one-on-one discussions were happening, but also asked her boss who I should talk to. Her boss walked me the few short steps to Ian Dickson, the TTC Design guy . We commenced a pleasant conversation on why I think they’re wrong, and they think it’s the best solution. . @bradTTC Oh, & pict