As I mentioned in my last blog post on the TTC’s Public Forum on accessibility, I spoke one-on-one with Ian Dickson @TTCDesign about the subway line names. We also spoke briefly about cognitive and visual accessibility of the TTC’s signage. I noted that the TTC signs are hard to discern for three reasons:

1. Dickson said white text on black is more visible. Um, well, books since time immemorial use white pages for better readability not dark coloured or black ones. And most posters seem to use light-coloured backgrounds. And I’ve had to help people standing right underneath white-text-on-black-background signs who were unable to see them. But since our talk I looked around at all the TTC signage to see how readable those black-background signs are. I would say the really big ones that are up high running along the edge of the platform with simple information like “South to York Mills” are. This rare one is so clear, you can read it easily through the train windows! Awesome. Too bad it's a one off. 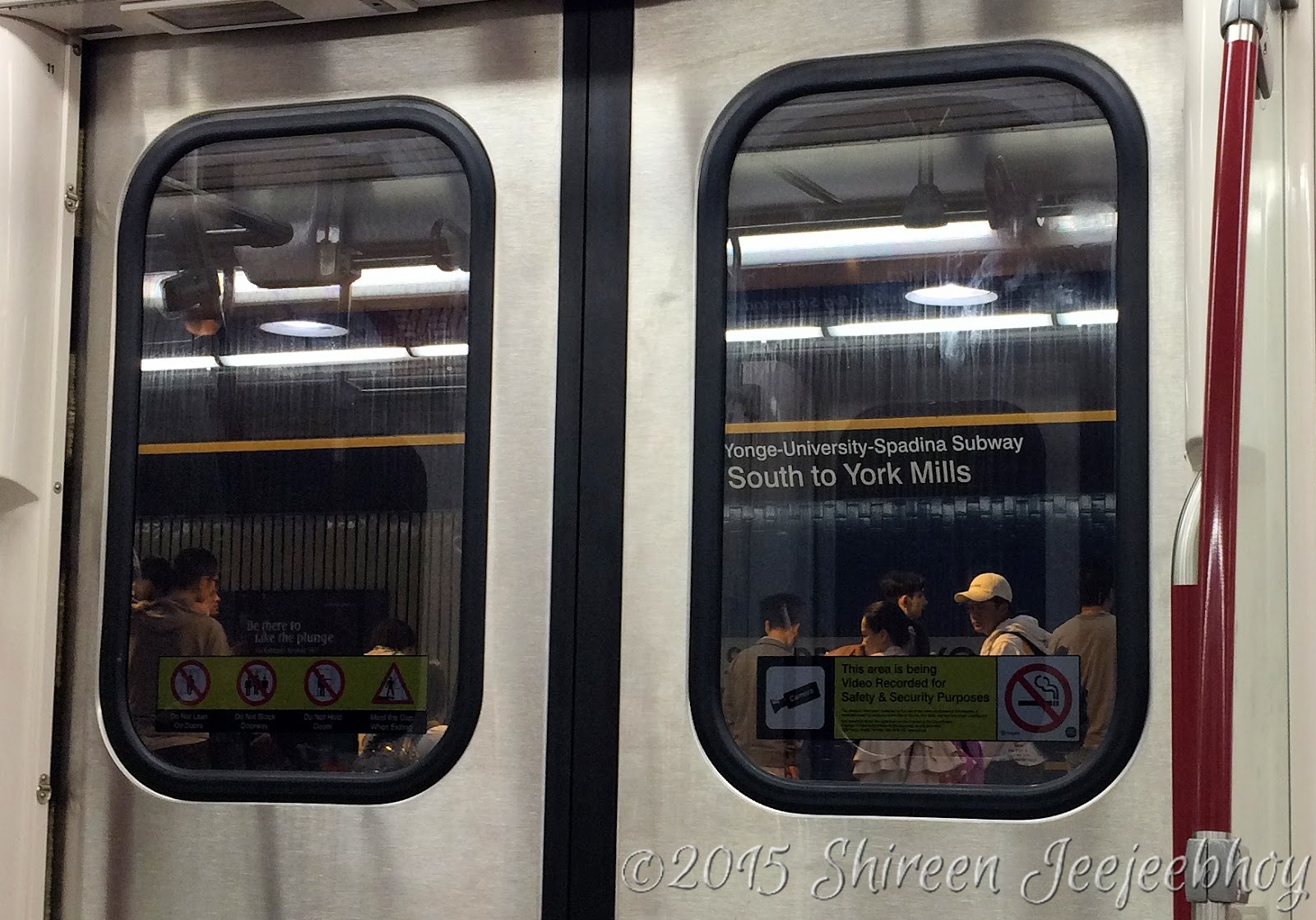 But even though TTC stations are not dark -- they’re pretty bright for subway stations, actually -- the small signs from the Exit signs to the maps are hard to spot and to read. The London Underground signs with their white backgrounds were much, much easier for me to spot and discern. From a quick search, I found these articles on readability (they looked at screens, but probably applies to paper signs too):

2. Aside from black vs. white, the sign’s size and extraneous information makes a difference too. The bigger the sign, the easier it is to read. There’s no reason the TTC can’t use the entire wall height for their platform map signs, like the London Underground does. This would also be helpful for short people who currently have to look up, way up, to be able to read the map. That means they’re looking at the maps from a greater distance than tall people. Toronto is a city of immigrants, many of whom come from countries where people are shorter than the average Caucasian Canadian.

3. The maps should show only where you are and where you’re going. TTC maps show all the stations on the line. I’ve had to help people confused from all the extraneous information who thought the train was going in the opposite direction indicated. London Underground signs don’t confuse people with information they don’t need. You only need to know where the train at this platform is going, not where it’s been. 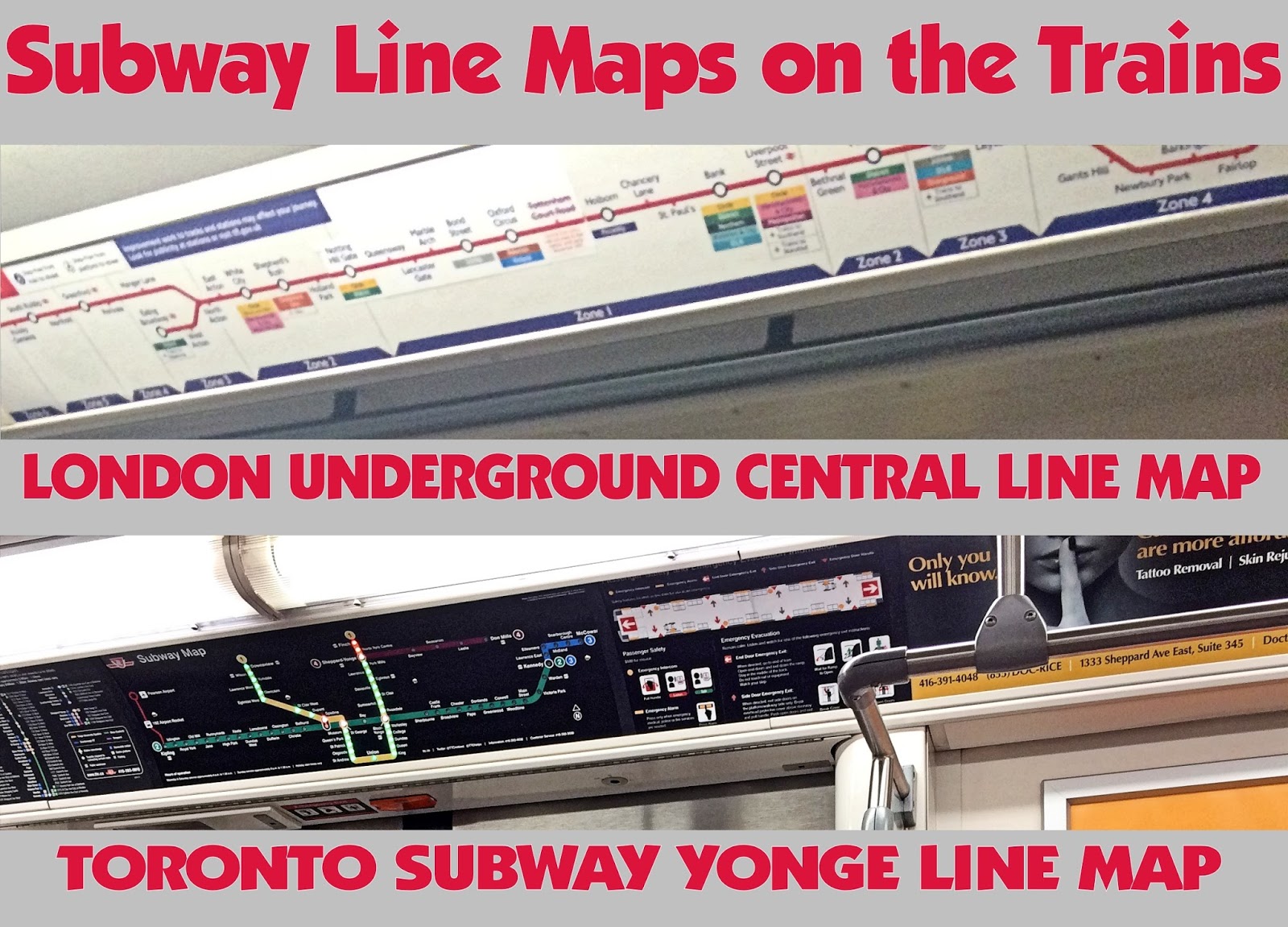 If the TTC used the entire height of the wall for their signs, used white backgrounds for maps, and kept the information to need-to-know, which the London Underground does, their signs would be easier to see.

But judge for yourself. 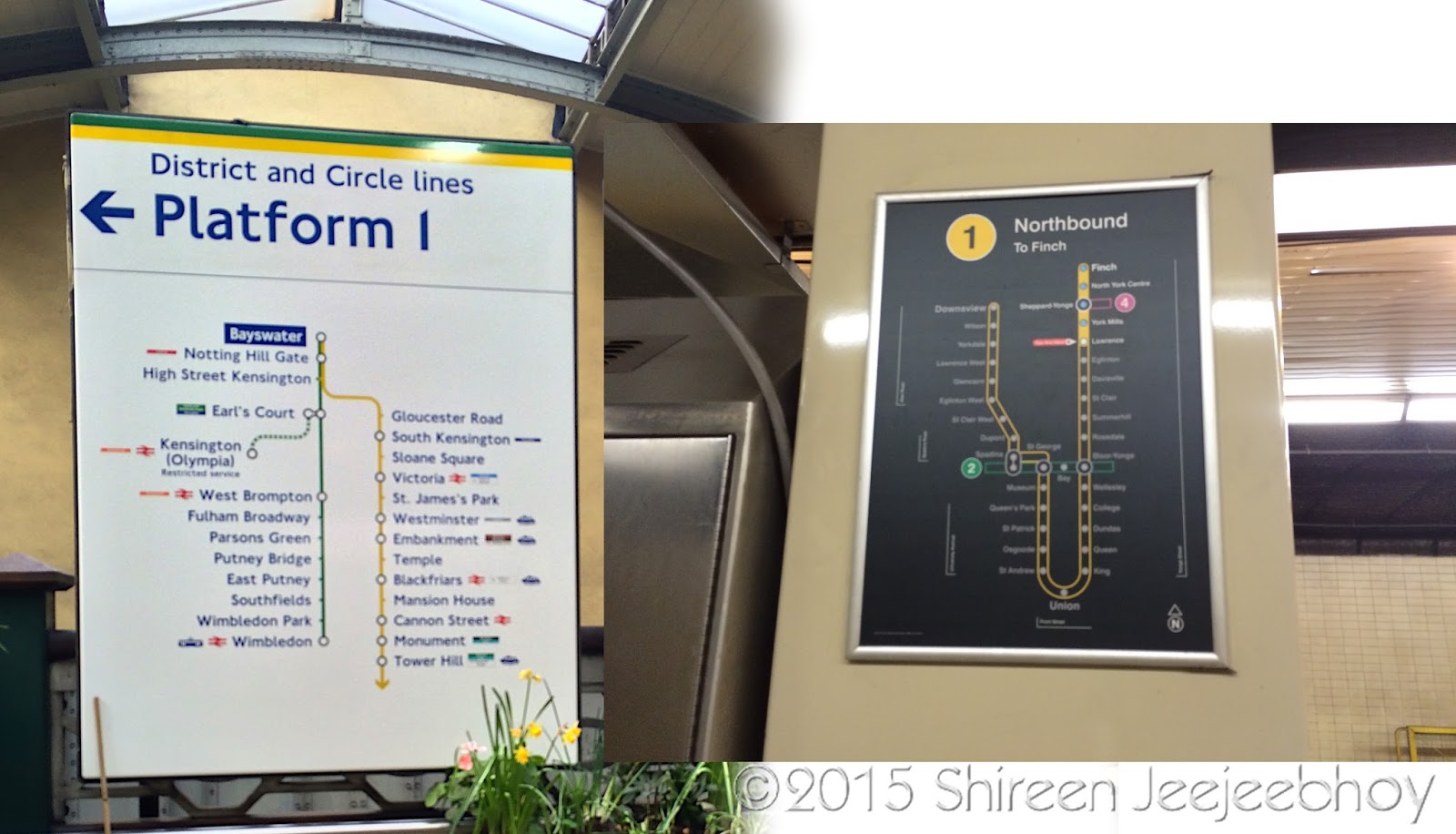 The London Underground sign is on the left; so big, it dwarfed me. The TTC sign on the right is way above my eye level and small. The photos in the collage are straight out of my iPhone.

Looking at these photos brings up one more issue: Is “Northbound” more informative than “Platform 1”?  I don’t know. Some riders need to know compass direction; others couldn’t care less. But the 1 on the TTC sign could mean Platform 1 to tourists. More confusion.

Other signage problems include: Exit signs are hard to find and to see; time to next train, and the time of day are hard to see unless I’m standing right underneath the screen; same with entering stations when looking for system-status information.

Exit signs should be plentiful and visible. Yellow is the most visible colour. Step off a train on the London Underground and you immediately see a “Way Out” sign. No need to hunt for it. Well, in most stations because in some the signs are not as visible as in others; still, it’s better than seeing nothing as at Spadina station above.

Dickson told me of the new international standard of a green Exit sign. See below comparison image. I’d forgotten I’d seen them all around the Underground. The TTC standard is that they’re visible for four hours after a power shutdown and/or emergency. (The Australian Accessible Exit Sign Project is working to include accessible information in the ISO standard.) I wasn’t sure how visible green is, but upon reflection (no pun intended!), I can see how this shade of green is quite visible and also green means “go” so it can implicitly encourage people to move in that direction. However, they’re kind of small and high up on the TTC. And the TTC should still place anything-but-black-highly-visible exit signs all along the platform so that no matter where you step off the train you know immediately in which direction to go.

Next: time of day and time to next train are given short shrift on the TTC. Time to next train is squeezed into the corner of a large ad/news screen on the platform. I literally cannot read it unless I’m within a metre of the sign. Same with time of day, which also has the added annoyance of disappearing when an ad takes up the entire screen except for time to next train. No such problem on the Underground. Visible everywhere. 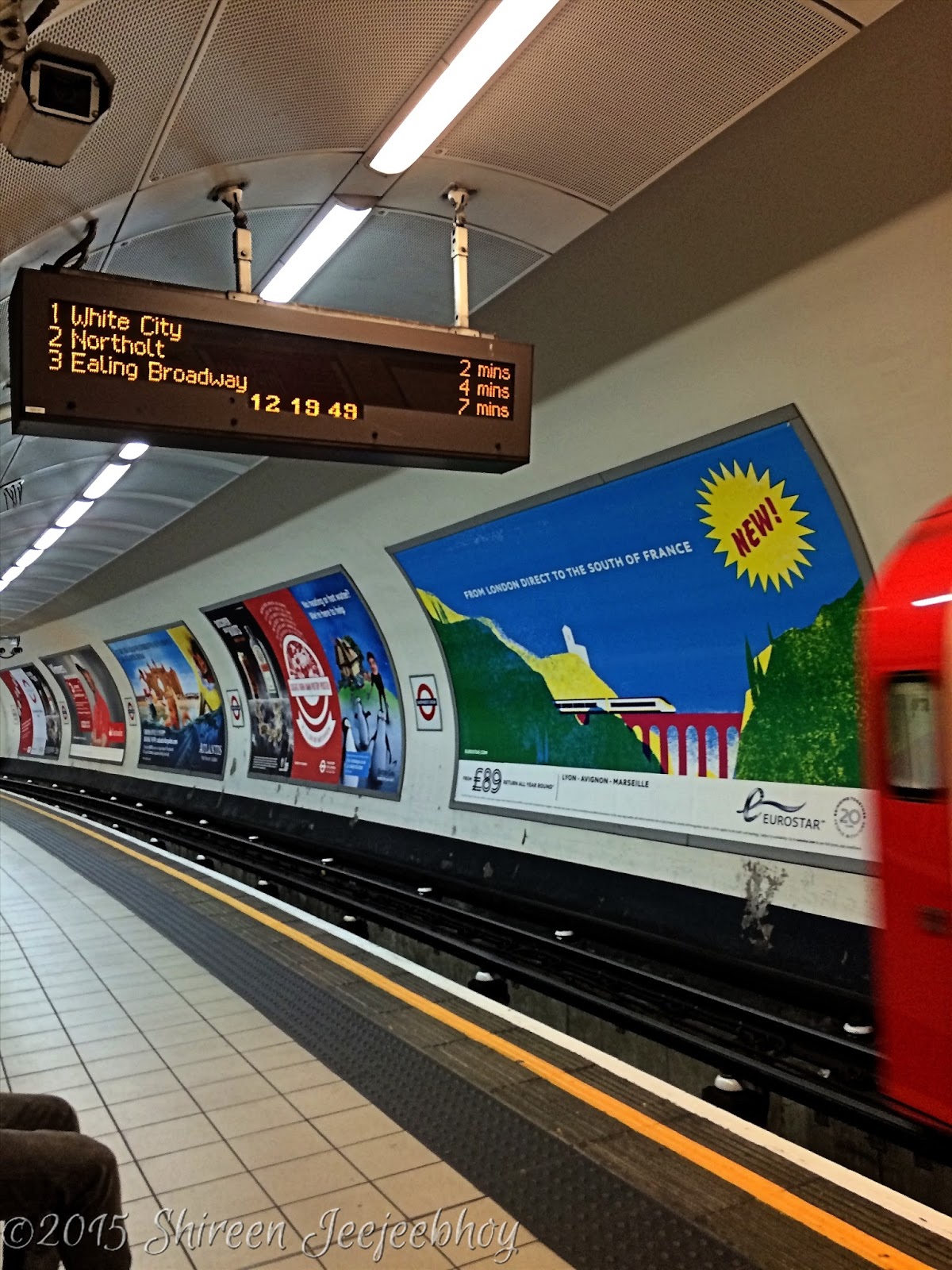 The TTC is putting up helpful screens at subway station entrances telling you about problems on the system. However, the essential information is squeezed into a line at the bottom of a massive ad on the screen. Hard to see from any distance; requires you to stand there while you’re, as usual late, as the message plays in one-line increments. The Underground had signs, but not in every station, and I don’t know how well they work because as, when the voice overhead in a train said, “This is your service update. We have good service,” one passenger quipped: “they wouldn’t say they have bad service, would they?”

Dickson challenged me to look at a pilot map initiative in TTC bus and streetcar shelters. I did take a look but haven’t had a chance to think about it. I’ll write about it later.

And one odd note. The next-bus information screens at bus platforms become wholly black when wearing polarizing sunglasses! If you’re myopic, removing said sunglasses doesn’t solve anything either. Now the times are visible but blurry!!