“I want the fifty million dollars.” Rob Ford in answer to a question: what will you say to Sousa? (Paul Moloney, Rob Ferguson, The Toronto Star, 21 June 2013)

Toronto Mayor Rob Ford didn’t get his $50 million, but Premier Kathleen Wynne may have given him the next election instead. Politics is a game (just like the law is a game, but I digress). The ones who know how to play it rise to the top, but they also don’t underestimate their opponent. I think Premier Wynne was blinded by all the bad news that’s hounded Mayor Ford for the last few months and thought she could cut $150 million in transfer payments to Toronto and get away with it.

The city is hurting. Everyone knows how underfunded city programs are, whether it’s the TTC – capital and operating budgets – social housing – the TCHC’s terrible handling of seniors recently hit the headlines again – infrastructure from roads to water to sewers – the Gardiner isn’t in the news but it still is deteriorating – the waterfront, and on and on and on. The way to fund it is what is dividing people. Mayor Ford knows his base, and he knows that people with little cash cannot afford property tax or sales tax increases. Sales and property taxes are regressive; income taxes are progressive. The province pays for these things out of progressive taxes. The city out of regressive. In addition, since amalgamation, the city has been paying for what are provincial and federal programs: welfare and disability. The Premier wrote in a letter that the province will take back these costs by 2018. That leaves 5 years of them being funded solely through the city’s tax base.  The city is the only government left paying for social housing. Given that Toronto is a magnet for Ontarians and other Canadians in trouble, the province and Feds should be paying for all social costs.

Premier Wynne noted that the province is funding other programs, but, for example, the $8.4 billion for TTC capital expansion may look huge but it’s inadequate to catch up after 30 years of neglect. I’m sure the same is true for other programs. With this funding cut, adding to the already inadequate funding, the Premier immediately shifted the focus from the Mayor’s personal woes and mishandling of his office back to the issue that got him elected in the first place, what he called the gravy train and what not-well-off citizens feel is too onerous: more taxation than what they get back.

In his presser this week, Mayor Ford showed why Ford Nation loves him. And why others are likely to vote for him again.

“The province says we are partners, they want to work with us. Unfortunately folks, I don’t see that.”(CBC video)

His use of the word “folks” is what lends him his endearing charm and makes him sound reasonable and the Premier petty and bullying.

Councillors like John Parker are siding with the Mayor in his outrage (not necessarily in his solution). This helps Mayor Ford. 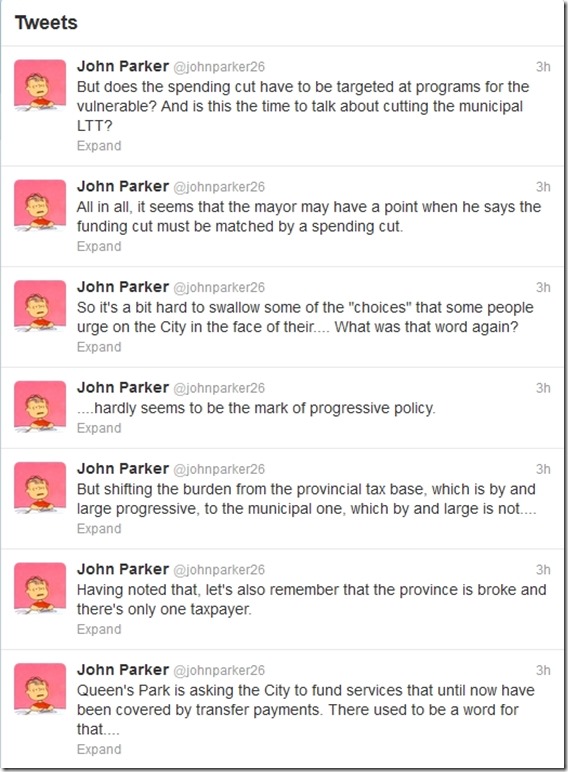 People hear this, and notwithstanding the letter from the province talking about land transfer taxes or other regressive taxation, they put the blame squarely on the province. Having the non-partisan Toronto City manager Joseph Pennachetti say, “It exacerbates an already difficult problem.” lends Mayor Ford’s outrage credibility. And so when people look at Mayor Ford and see him defending the little guy, they think: I agree with him. They don’t think like Parker said in the last tweet that we need to think of a better solution than target programs for the vulnerable and that the vulnerable are being made the fall people for the war between Ford and the province, between Ford and taxation, between Ford and anti-Ford folks who want to force him to fail on his tax promise. They see only that Ford is standing up for Toronto. Not understanding that is the mistake the Premier and the anti-Ford crowd are making.

The province saying that the city has choices and can use the land transfer tax and car registration tax makes me wonder if they were deaf and blind during the last election. Although there is a vocal contingent for these taxes, obviously they are in the minority because of the one big reason many voted for Mayor Ford – their anger at these taxes being imposed on them by former Mayor David Miller. That and the garbage strike. But I digress.

Mayor Ford is looking good right now, and it’s easy to forget how he failed us on subways, how he essentially disappears for months as a leader and talks only about the next election as if an election is somehow going to solve things, how he continues to lose staffers, and how in a government that requires co-operating he has still failed to learn the art of negotiation. I’m pretty sure that if he knew how to negotiate and still had credibility in the eyes of other politicians – which is what matters when we want things to get done beyond filling potholes – then he may’ve been able to get Finance Minister Charles Sousa to move and not stand fast to his ridiculous stance. But in Mayor Ford’s defence, it has been an awful long time since we’ve seen any mayor competent enough to be able to do that. That’s why Toronto is falling apart.

If the province really wants to get rid of Mayor Ford, they need to stop shortchanging Toronto and to institute the rank ballot reform for the next election, not the one after that. Only then will Toronto have a reasonable chance of electing a mayor who appeals to Torontonians but has the competence to get the job done, not just talk a good talk.