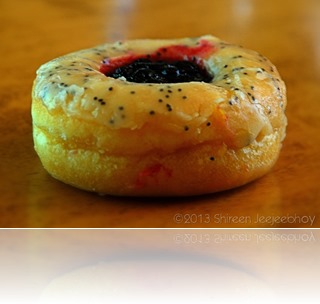 They say that doughnuts are the staple food of Canadians. I must be a real Canadian, for I am a sucker for doughnuts. And so when I heard that a real doughnut shop had opened up in Toronto, one that serves doughnuts of both kinds (raised and cake), one that is take-out like Tim Hortons, but unlike Timmies uses organic ingredients when possible and no preservatives, I was there.

One of my favourite kinds of doughnuts is the chocolate dipped. Naturally, Jelly Modern Doughnuts didn’t have any ready to go because that has to be everybody else’s fave too. I mean, who doesn’t like chocolate on their doughnuts?! But never fear, they mean it when they say they make their doughnuts fresh. They were mid-making up a new batch. They quickly got two of the small doughnuts topped and ready to go for me. The only problem with that is there was no time for the chocolate to set before they wrapped them up and placed them in the wide brown paper bag – a size of bag clearly made for carrying doughnuts. 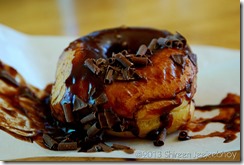 Aside from the mussed factor, I had no problem enjoying the callebaut chocolate doughnuts when I got home. The topping was so darn good, I had to swipe it off the paper wrapper with my finger. Finger-sucking good, it was! The doughnut itself was fresh, as advertised. Aside from my own home-baked doughnuts, I have not had one quite that fresh before. It was soft and lovely. In terms of taste, I’m going to be sacrilegious here and say that it was not leap years better than a fresh-baked Timmies. But getting a fresh-baked Timmies is quite frankly the luck of the draw. And since Timmies is, in my opinion, better than any of the other usual doughnut suspects, including Starbucks, I can safely say that Jelly Modern Doughnuts’ fare is a universe ahead of the rest of the competition.

The doughnut pictured at the top is a blueberry filled, poppyseed-lemon-glazed doughnut. The lemon was intense. The blueberries were intense. An explosion of flavour in the mouth. Yummer.

I also bought a cinnamon bun. I’m pretty picky about my cinnamon buns. St. John’s Bakery makes a decent one. But aside from theirs, cinnamon buns are either too sweet and drippy or too cinnamon-y. Jelly’s is, well, a bit anemic. I mean, you know you’re going to find it a bit wanting in terms of cinnamon when you can’t even see lines of cinnamon until you slice into it. From the outside, it looks like a boring plain doughnut with a swirl of thick icing on top. The icing is decent, the dough is decent, but the filling is so little, one has to squint to see it and taste it.

To sum up: the price will keep me from buying there frequently. But the doughnuts will drag me back, even if I have to scrounge out my last nickel from the depths of my purse.