The Toronto Star has been breaking stories about Mayor Rob Ford and his fitness to lead the city for quite some time now, but Gawker scooped them on the latest one. They immediately responded near midnight last night and detailed the video of Mayor Ford allegedly smoking crack cocaine. But while they’re the ones questioning Ford’s fitness to lead, they’re also the ones who are primarily responsible for this mess – them and our arcane electoral system.

In the last Mayoralty election, the Toronto Star wanted George Smitherman to win. They campaigned to make it happen, writing up stories that seemed to help push Smitherman’s competitors out of the race. I well remember how they reported on rumours that Sarah Thomson was going to quit the race long before her announcement. To me, it was like if they reported on rumours, then they could make them reality. I was livid. I was livid at their rumour mongering and at her quitting, leaving us with two crappy choices. It’s no wonder so many of us either didn’t vote or seriously considered not voting.

The first past the post system made it harder for the non-top two candidates, like Thomson, to stay in the race. If we’d had a ranked ballot method of voting, they may have stayed in, figuring that they may not be number one on the ballot but they could be number two and thus have a chance of winning. But first past the post means whoever had the most votes, even if it’s only seventeen percent of the votes, wins. The Toronto Star was able to achieve what they did because of this stupid system.

It’s all very well for the rest of Canada and partisans to lament those who voted for Rob Ford, but look who his competition was: an admitted drug addict who’d made a total hash of ORNGE and eHealth, and had a wonderful reputation for being a bulldog who couldn’t care less about working with others. Toronto City Council requires a mayor who knows how to work with others, how to persuade and seduce rambunctious and fractious Councillors. Instead, we were faced with a choice of a rogue Councillor who understood the deep need of citizens not to be fleeced and to finally have subways so we could, you know, get somewhere and a bulldog who hadn’t shown much interest in fixing Toronto’s problems before. What a choice! 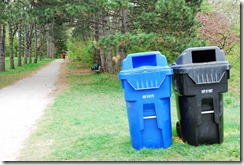 And by the way, the previous two mayors were nothing to write home about either: the first one for the amalgamated city was ill and past his prime, which we didn’t know until after the election; the second ran roughshod over those of us who weren’t healthy or wealthy enough to fit in with his plans for making this city more unlivable and uglier. Those garbage bins former Mayor Miller dumped on us symbolize what’s been done to our city. And I am mad.

I hope that Toronto City Council will pass the motion to have the next election use the ranked ballot system, that the province will okay it, and that the biggest newspaper in the land will not bully every candidate but theirs out of the race again. Only then will we have a chance of voting in a mayor for Toronto that we deserve and need.