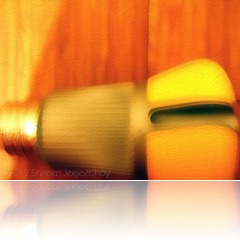 I have not liked CFLs (Compact Fluorescent Light bulbs) for quite some time. They give me headaches. When I was in the store and telling the sales guy that, I heard this deep voice behind me firmly concurring. I had read other people get migraines or bad headaches from CFLs, but it was nice to have my own experience confirmed in person, especially since all the energy saving programs in Ontario give coupons only for CFLs, as if they’re the best option for human health and, oh yeah, the environment with all their mercury and all.

LED light bulbs have been around for some time in traffic lights, Christmas lights, and lights an engineer installed in Nepal. Recently light bulb manufacturers have produced incandescent light bulb replacements. But everything I had read about LEDs pointed out their lack of availability in Canada and high price. Get CFLs was their point. As if. I like being headache free from light bulbs, and I haven’t forgotten my high school chemistry lessons wherein we learned how toxic mercury is.

Still for some time, I needed to replace the bulb in a ceiling fixture. I didn’t want to put in an incandescent, as changing bulbs in ceiling fixtures are for me a shaky climb up a ladder then an arm-hurting removal of the old bulb and installation of new, never mind nervously ensuring the cover is replaced without crashing to the floor. I looked again into Toronto Hydro’s coupons and GreenSaver Program. Meh. Still with the CFL-only coupons. 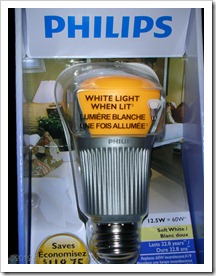 I finally got fed up with no light when exercising or watching TV or reading on a cloudy day or after dark and hauled off to Home Depot. Maybe they’d be stocking LED lights and maybe they’d price them low enough, meaning under $40, and maybe the colour would be similar to an incandescent. Not only did they stock LEDs, they priced them at about $19 for a 25W-equivalent one to about $29 for a 60W-equivalent one. They did look weird, I have to say, with their three deep-yellow pie-shaped parts of the light-emitting end of the bulb, but I was assured their light colour was pleasant. So I bought one. They also stocked floodlights for indoor and outdoor use. Those were above $40 being 90W-equivalent.

I should’ve bought enough for all my ceiling fixtures and floodlight needs to replace those annoying CFLs.
Reactions:
Consumer Economics Environment Money Technology