Leaning to the Light 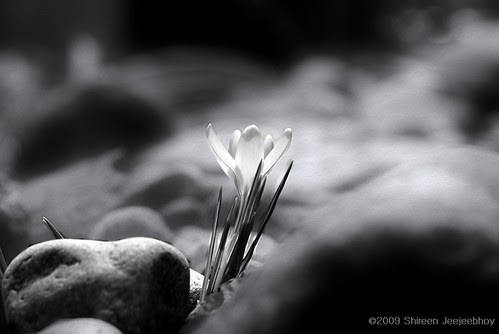 Leaning to the Light, originally uploaded by Points North.

When a catastrophe hits, I've found the Book of Job the best work anywhere to, maybe not understand -- for only those not in the catastrophe can understand -- but at least cope with it. Job brings affirmation and light into dark spaces, it brings the feeling that one is not alone in suffering, that even when fellow humans flit in and flit out when they think it's over, God does not.

It really doesn't matter what the catastrophe is, whether one has suffered it alone, with a few others, or an entire society, as happened yesterday in Haiti, the question always is, Why? Through the mouths of Job's friends and a young upstart called Elihu, the familiar recurring theme of your sin did it emerges. But Job refutes every platitude, every easy answer, every familiar answer. He complains -- oh boy, does he complain -- he's bitter, he's angry, he's suicidal right at the beginning. But unlike the others, he grows, he thinks, he constantly talks to God. And in the end, It's Job God answers, and it's Job that God holds up as the one who spoke true.

So though many rush to render aid to Haitians (and before them the tsunami survivors), it'll only be the few who stick around past the first acute phase of catastrophe. Most will grow weary, their attention drawn by other things -- even Job's friends made to leave and Job had to call them back -- despite the fact that suffering from events like this or from long-healing injuries and illnesses go on and on like some macabre Energizer bunny. It's the blessed person who sticks around and offers aid and comfort, in the best way they can, through the interminable time of healing.