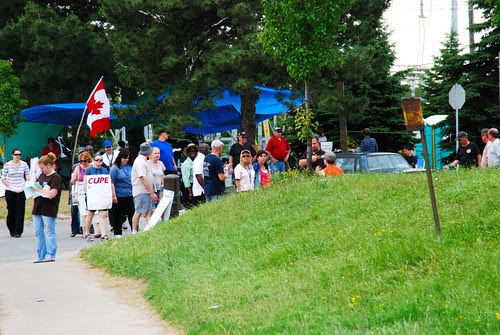 At last, in a move in the direction opposite to where governments are going these days, Mayor Miller and Toronto City Council released to the public details of their bargaining position. Now the public has a sense of the issues and where exactly the city stands as they negotiate with locals 79 and 416. Since we are the ones whose pockets are paying for all this, the union payment package, it's about time.
The package comprises straight wages -- money in the workers' pockets -- and benefits -- not so much money in their pockets as money that won't have to come out of them and thus has a monetary value.

To see if this is fair, I took a look at the Consumer Price Index for last 12 months. While food prices rose quite a bit, energy prices dropped a lot, which led to an overall CPI increase of 0.4% in Ontario. The Bank of Canada has an inflation calculator that gives an overall picture for the whole country and over whatever years you want to look at. On the other hand, the Bank of Canada uses a Core CPI to assess "trend of inflation" as well as "effect of changes in indirect taxes on the non-volatile components" of the CPI. That Core CPI or Index is 2.0%. However, the Core Index doesn't include such necessary volatile components as food and gasoline, and so the 0.4% is closer to real spending. There's no telling where those costs will go in the next year, never mind four, but for 2009, we know inflation is essentially less than one. (Makes one realise the Councillors recent +2% pay raise is a cushy one, well above the rate of inflation they claim it covers.)

The rest of the wage increases, to me, look reasonable, if not generous in the last year. Their base wage pay is also pretty good right now; in addition, inflation has been pretty low for the last few years. So even if over the 4 years their wages didn't keep pace with inflation, it would not lead to a substantial decrease in spending abilities either.

The big one is sick pay. All sick day banks will be frozen on 1 November 2009. Currently after a probationary period of 6 months plus one month, all temporary and permanent employees are eligible for the sick day bank. Basically for every month of "unbroken" service, the employee earns 1.5 sick days minus sick days taken. You can see how this benefits senior employees greatly while newer employees are pretty much SOL till end of first year. Under new short-term disability plan, newer employees would still have a disadvantage compared to senior employees. However, right off the bat, after their probation period and in their first year of employment, they could take up to 910 to 1040 hours off -- albeit at 75% of salary -- at which point short-term kicks into long-term disability. This is much fairer. As employees rise into 10 years of seniority, they gain more and more hours of short-term disability at 100% pay, starting at 1-year of employment. Of course, employees will have to provide more documentation that they're sick. And since OHIP doesn't pay for medical certificates, they'll have to pay for them.

One interesting little factoid is in the PDF docs: "The $260 million liability relates to management/non-union employees, fire fighters, Locals 79 and 416. It does not include staff of the City’s agencies, boards and commissions (for example, TTC, Toronto Police, Toronto Public Library). The sick leave liability as of December 31, 2007 for Locals 79 and 416 only is approximately $140 million." So, um, this short-term disability plan isn't going to solve the city's revenue cannonball, only about half of it, or half of the number we know. Does that mean we'll be seeing the city play hardball on this issue with firefighters, police, librarians, management, etc.? Should be interesting. I wonder if the media will pick that up, and why they didn't pick this bomb up?

But back to benefits. Depending on seniority, the city will bribe union members to give up their lucrative sick day banks, at an average payout of $8,500, with those who've worked less than 10 years receiving $700. The mind boggles at what 30-year employees get.

No change in seniority.

No change in number of stat holidays, but they will no longer get Remembrance Day off -- hey, does that mean garbage will be picked up on that day now?!! Instead, they'll get the new Family Day in February (that's still such a lame name). And there is a modest change in coverage of prescription dispensing fees and dental recall exams from 6 months to 9 months.

On balance, this looks like a pretty fair deal, with some very nice bribes, uh, payouts to long-time employees. It also looks like women members of local 79 will finally get sick day coverage. I don't know why the union would counter-offer that, other than they're used to cushy wages and cushy benefits while this deal is tending to the fair if generous but not cushy side. The problem is that employees are used to having it good, very good, and after awhile people tend to take these things for granted so what seems fair to most will seem punitive to them.

I've heard in months past that not all employees are happy with their union bosses, some feel that their election was rigged, and now I hear some workers are ignoring the orders to obstruct people from dumping their garbage at transfer stations and temporary dump sites plus 500 have broken the picket lines and gone back to work. There's restiveness in them there ranks. So though I foresee the union bosses holding out for the cushy offer, the rebellion of some workers, the city at last being willing to seek injunctions, and the fury of Torontonians may cause the strike to end soon.

My only concern is that the desire to end the strike may cause the city to up their offer. The last Council meeting gave the green light to sweeten the pot, and that pot is what we see here. Enough sweetening, time to stick to it.
Reactions:
Economy Garbage News Politics Toronto