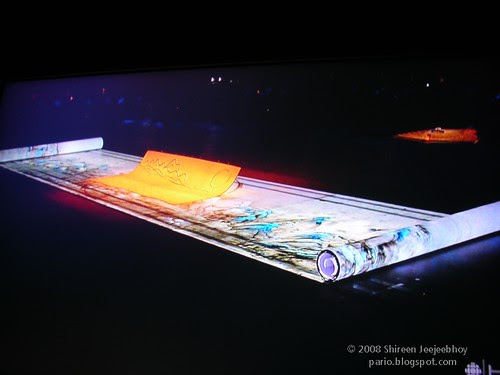 The Paper is Lifted, originally uploaded by Points North.

I'm fortunate to be a Canadian. The CBC is back to doing a stellar job in covering the Olympics live, in person, and informatively. Ron MacLean gave us all sorts of trivia, and Peter Mansbridge filled us in on up-to-the-minute conflicts -- whatever happened to the Olympic truce, he mused -- all interesting commentary that rarely got in the way of enjoying the Ceremony.

The torch lighting was grand; somehow I missed seeing the cauldron in all those overhead shots. But it was there, waiting in the dark. But, for me, the best torch lighting moment remains the archer.

This photo shows the end of the first stage of a running motif of paper -- a Chinese invention -- that was added to and used in different ways throughout the ceremony. Quite clever. The inside top rim of the National Stadium, or Birds Nest, was part of the ceremony as it's like one big moving screen. Amazing!

I can't imagine the Canadian governments ever having the imagination and ambition to attempt the marvels of artistry and architecture unfolding in Beijing. It was a bittersweet moment, watching the Opening Ceremony, knowing Toronto was oh-so-close to getting this Olympics. But perhaps the choice was best, for the federal government would not have been so enthusiastic, would not have trumpeted these games for Toronto in the way China has for Beijing. Mediocrity and Toronto jealousy are the rules of the game here, and I swear it's getting worse. And yet...and yet...

Individuals have brought beauty and boldness to some of our institutions here in TO. And suddenly, Harper, on the eve of the games, has OK'd Toronto bidding for the Pan Am games. Was he shamed into it by seeing what China has done for Beijing, and how that can bring a country together? How sport helps us to aspire to the best in us, which is better than the Canadian political way of aspiring to the ugliness inside ourselves? Or does he just want our votes?