Women's Hockey and a Hockey Fanatic 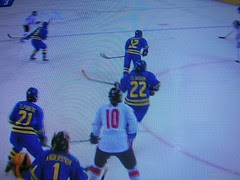 My English grandmother would've loved watching Gillian Apps score her hat trick against the Swedes in Women's Hockey. She played field hockey -- probably gleefully whacking many shins -- well into her 50s, and probably was the one who got my parents to buy our first television set so that she could watch Hockey Night in Canada when she moved here. Such was her passion for hockey that Saturday nights were sacrosanct in our house -- if you talked or tried to flip channels during the game, you got the blue-eyed glare to leave.

Family legend tells the story of how hockey got her a pass on her citizenship test:

Judge: "Who was the first Prime Minister of Canada?"

"Who is the Prime Minister of Canada."

"You're not doing very well here."

"No," she laughed huskily and got him laughing too. "Why don't you ask me about hockey."

"OK. Who does Darryl Sittler play for?"

And she was off on players, who's any good, who's lousy, who scored how many goals, NHL team rankings, and any other minutae to raise the judge's eyebrows. She netted her citizenship.

As for the criticism that the Canadians are running up the score so that they can grab home ice advantage, my grandmother would've called it like this: the Americans are just sulking cause they can't have home ice and are passing on their sour grapes to the bored media while they wait to pounce on the non-story about Gretzky. Bunch of wimps.