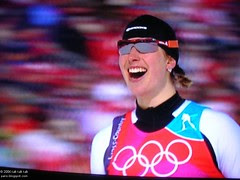 Hey! Where did she come from?! Chandra Crawford is the hidden jewel of the Canadian women's cross-country team.

For years, Beckie Scott blazed a difficult trail, putting Canada on the cross-country ski map and cleaning up the sport. Crawford today reaped the rewards. She was a rookie last year, only 22 this year, tenth overall until she won bronze in a recent race at Davos just before the Olympics. She learnt then the secret to winning, and today she executed it once, twice in the heats, and thrice in the finals. Smart, hard skiing, as she said:

"OK, let's hammer off the front and make everyone else work."

No one could catch her, not even the favourite. (And what was even stranger -- the men looked slow by comparison.)

This gold means Canada is claiming itself as a winter nation, not just a hockey nation with a few speed skaters thrown in. Finally, we are embracing our bracing weather. But the key to Crawford's win?

"My parents were huge....That's what you need to do well in sport. Support."